If you drive your favorite hot rod or muscle car out on the street, well… sooner or later, stuff happens! Unfortunately, accidents are part of driving, but the strength of the components you have on or under your car can be the difference between severe damage or minor damage.

David Harvey and Harvey’s Classics are a Heidts dealer in Athens, AL and they had just finished building a high-dollar customized ’68 Camaro for a valued customer. Out on a test drive with the customer, David explains what happened next.

“We were going about 60 mph when we came around a curve and noticed a severe pavement dip at the approach to the bridge. Sean (the car’s owner and driver) only had to time to hit the brakes for a moment, but he knew to let off before we actually hit it to let the front end come back up. I would guess we were probably still going 45 to 50 mph,” said Harvey. “It was one hell of an impact!”

Getting out of the car to inspect the damage, both David and Sean were pleasantly surprised. “I was really surprised that it didn’t even change our door-to-fender gaps on either side. When we got it back to the shop, we put in on the lift expecting to see some significant damage, after all, the force of that impact had to go somewhere…we FELT it. Boy, were we surprised again!” 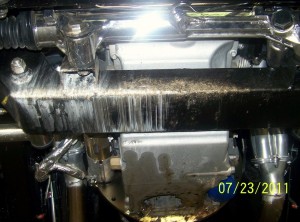 However, as you can see by this next photo, the LS7 engine’s oil pan was not as fortunate.

Be sure to check out Harvey’s Classic website as they have many photos of their recent project, including this high-horsepower ’68 Camaro that serves as the owner’s daily driver.